The girls have been away for the last couple of days, which has meant lots of sewing time for me and not really having to think about what to cook (bliss, especially after the last 2 weeks of very hectic work)


The other day I was looking through some old American quilting magazines to look for something for someone and came across this
Having done some paper piecing for the mystery quilt, I decided I had to give this a go.  I have enough scraps (or so I thought) to do some nice bright colours 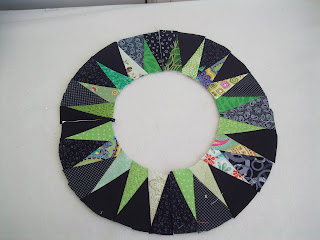 It was fun to do and this one has used up a lot of my green scraps.  I think I have enough for three other circles, one with oranges and yellows, one with purples and one with blues.  Which leaves a dilemma as I need one other circle.  And I may not have enough blacks.  But I will scrape it all together somehow - I may have to buy another black FQ of some kind.
I have never sewn curves before.  So I went to Leannes you tube tutorial (thanks Leanne, it was so easy to understand) and then gave it a go 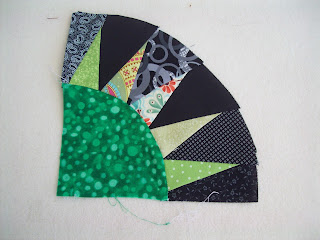 I think it came out ok, but the test will be putting all 4 peices together.  I am changing the original pattern slightly, with a different arrangment of the circle - whenever I next get a chance to pick it all up again
I met the girls at Stansted this evening (only about 40mins from here), well the services on the m11 just by Stansted.  They were on their way home from a family reunion (on their dads side) and were dropping aunty and uncle off at the airport.  They live in Inverness but also have a house in Spain and were jetting off there for 7 weeks, so we all caught up for a coffee, which was so lovely as its been about 6 years since we last saw each other!  We just need to arrange flights and we can pop out for a week in the summer: fingers crossed!﻿
Posted by Catherine at 18:59

Thank you for taking the time to leave me a message

Catherine
Tiptree, Essex, United Kingdom
I live in the lovely Essex countryside with my two wonderful teenage daughters -in Tiptree, where the jam is made. I love quilting and sewing as a way to relax from everything else going on!