Happy Scrappy mail arrived for me this week from Jenny It came beautifully packaged all the way from Denver, PA, USA﻿ 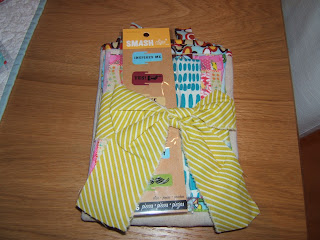 This is my 'little' something handmade from scraps that Jenny sent me: isn't it fantastic (and not so little!)  Unfortunately the light doesn't show up the quilting.  Jenny tells me that this was her first ever swap - well she got everything so spot on! 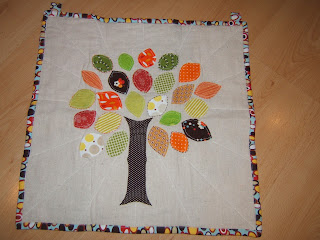 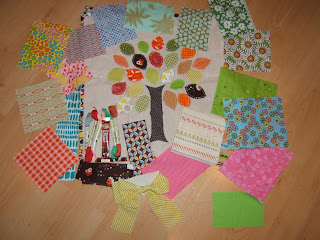 all just perfect for two weeks time, when I have taken my last (I hope) AAT exam and can do LOADS of sewing.
I may just have signed myself up for one last exam today - what an idiot!!  But there is method in my madness.  This one is a CIPFA qualification in Academies accounting.  It usually takes 6 - 12mths, but having looked through it 90% of the course is the same as the exam that I am currently studying for, so I figured I would be mad not to do it, but hopefully get in done in less than 6 weeks ...... so thats January and Febraury spoken for then!!   I must be mad
Posted by Catherine at 18:32 5 comments:

My sewing activities have been woefully inadequate recently.  Not a loss of mojo, just time!
Anyway, the good news is that I have spent 6 hours of today re-applying for my job and applying for the new one.  I have sent it off to my brother for him to cast a critical eye over it, and then that's it, it's done!

I have been sewing some of these: they are only a couple of inches. 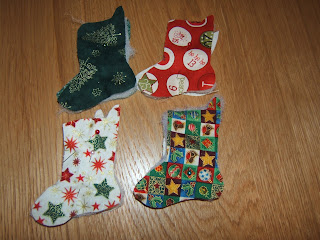 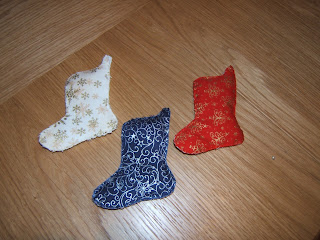 with the idea that they will turn in to this
﻿ ﻿I used the tutorial from punkinpattern - go and have a look as its well written and really easy to follow.  I will be doing some more hand stitching tonight.

I have put in for my final (i hope) exam for the 14th december: just thinking of all that spare time is what is keeping me going at the moment.  I can really look forward to Christmas without that hanging over me!

Last night I was browsing through pinterest for some inspiration for a christmas decoration - for my partner in the secret santa that we are doing over at Bee a Brit Stingy.
I was led to this fantastic tutorial at  a cuppa and a catch up.  Which led to this 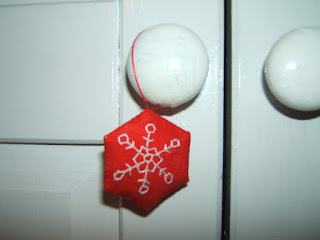 A little 1" hexie with a snowflake embroidered on to it.  This was one of the easiest Christmas decorations I have made, and took about an hour, sitting in front of the tv last night 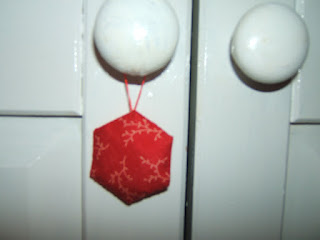 A fairly rubbish picture of the back, but you get the idea!!

this is me on pinterest: there seems to be a lot of snow, Christmas, quilts, quotes and motorbikes: sounds like the perfect life to me!!
Posted by Catherine at 17:32 11 comments:

Time is not my friend

I am feeling the pressure a little for a couple of swaps that I signed up for.  Now, when I signed up for them mum did not have her date to go to hospital and I was not expecting to have to be completing application forms for my job!!

I signed up for the scrappy swap organised by Kat as well as a secret santa for the Bee a brit stingy
I have made a QAYG wide mouth pouch for the scrappy swap, but havn't started on the other swap yet!  I am more than happy with the scraps I have used for my partner... 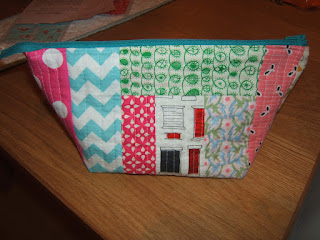 ..... but slightly less happy with the way my sewing has turned out.  I had an issue with the zip ends not matching up.  So, I had to unpick a bit, which has in turn led to a slightly wonky pouch

I can't show the middle section of this side as this will give the game away.  But I am really hoping that it will make my partner smile-she will understand the story behind it  (I hope!!)  I have decided that as the pouch is on a wonk I will be sending more scraps than a FQ's worth, including some that I know she has been collecting, to make up for it-any other time, I would have started again, but at the moment I just don't have the time.  It isn't dreadful and still looks good (well, I think so!) 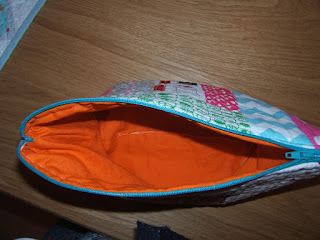 I have spent today taking Beccy to a dance exam and then having to go to the hospital to pick up a prescription for my mum that they had forgotten to give her, only to find out that the doctor had not bothered to complete the prescripton which then led me to running around the hospital, finally ending up at the pharmacy, who thankfully, couldn't do enough to help me!  Yesterday was spent taking mum shopping and sorting things out at her house.  No time for sewing then!!

Yesterday was Jennys 19th birthday - where has that time gone!!  She went out with her friends last night and got in at 4am.  Needless to say she hasn't been herself today!!
Jen, on the left, ready for her night out

Tonight, we are going to settle down and watch 'The best exotic marigold hotel'.  I have read the book and really enjoyed it, so am looking forward to watching the film and chilling out
Posted by Catherine at 17:18 10 comments:

That was the week that was..

Well, the week has whizzed passed and thank goodness: it has been a really difficult one!
Mum went in for a knee replacement op on Monday, so there have been trips to the hospital and tidying her house before she comes home (she is some sort of compulsive hoarder NOTHING gets thrown away!)
We have all been told at work that we have to re-apply for our jobs-bit of a shocker! But the silver lining is that there will be three new posts to apply for, at a higher grade, but you can only apply if you have the minimum qualification of AAT: turns out that the last 3 odd years studying havn't been in vain!! (last exam is December, so I will be as near as dam it qualified.) so I figure I won't lose anything by applying for a higher grade!

My bee blocks have started to come home.  Tanya made me a little something with the scraps 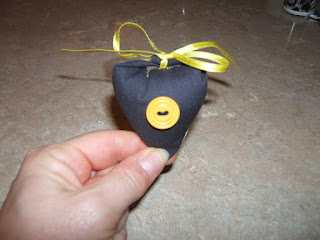 My house is full of hanging hearts, all over the place, so this is perfect
﻿
It was a little ray of sunshine to receive it this week, thank you Tanya 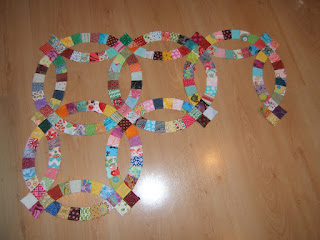 ﻿Revision for me this weekend, but there WILL also be some sewing!!
Posted by Catherine at 18:13 11 comments:

The week that wasn't

I have had a few days off this week, almost a week, but I don't know where those days have gone!

There has been very little sewing as I have had my dad and stepmum staying and the days have whizzed by.  Wednesday was Beccys birthday, which we spent at Bluewater, spending birthday money and being spoiled by grandparents!

﻿ ﻿ Yesterday we went to Cambridge to the open day at Anglia Ruskin for Jenny to have a look around.
Tomorrow it's my mums birthday, she goes in to hospital for a knee op!
And then it's Jens birthday on Saturday!
Mine is somewhere in between that, but I have already been allowed to open my birthday present whilst my dad was here...Jen had organised everyone to give her money and then went and bought me a Nexus 7 (android) tablet: wow, I was speechless (doesn't happen often)  it is amazing and I have so much to learn with it, but I have been messing around with it today. 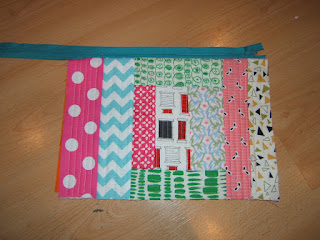 This is for my secret partner in the scrappy swap.  I have used the quilt as you go method, which I have been wanting to try for ages, and this is just the perfect thing 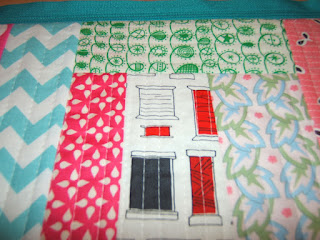 I really hope that I am getting it right for my partner!!

Back to work tomorrow: not looking forward to that one!!
Posted by Catherine at 17:23 14 comments:

The 1st of November heralds mad birthday season for me: yesterday Beccy was 16 (how did that happen!!) then it is my mums, mine, Jennys, my sister in law and then my niece.  6 of us all within two weeks!
It also heralds Lynne's fresh sewing day a time to look over October makes.  I don't think I did too badly:

And best of all was passing my project that I had been working on for about 8 weeks!! Only one exam to go and I am done!

So, for me, October was a successful month.  Linking up with Lily's Quilts

Catherine
Tiptree, Essex, United Kingdom
I live in the lovely Essex countryside with my two wonderful teenage daughters -in Tiptree, where the jam is made. I love quilting and sewing as a way to relax from everything else going on! 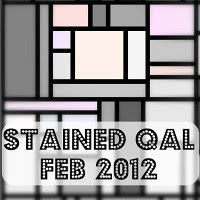